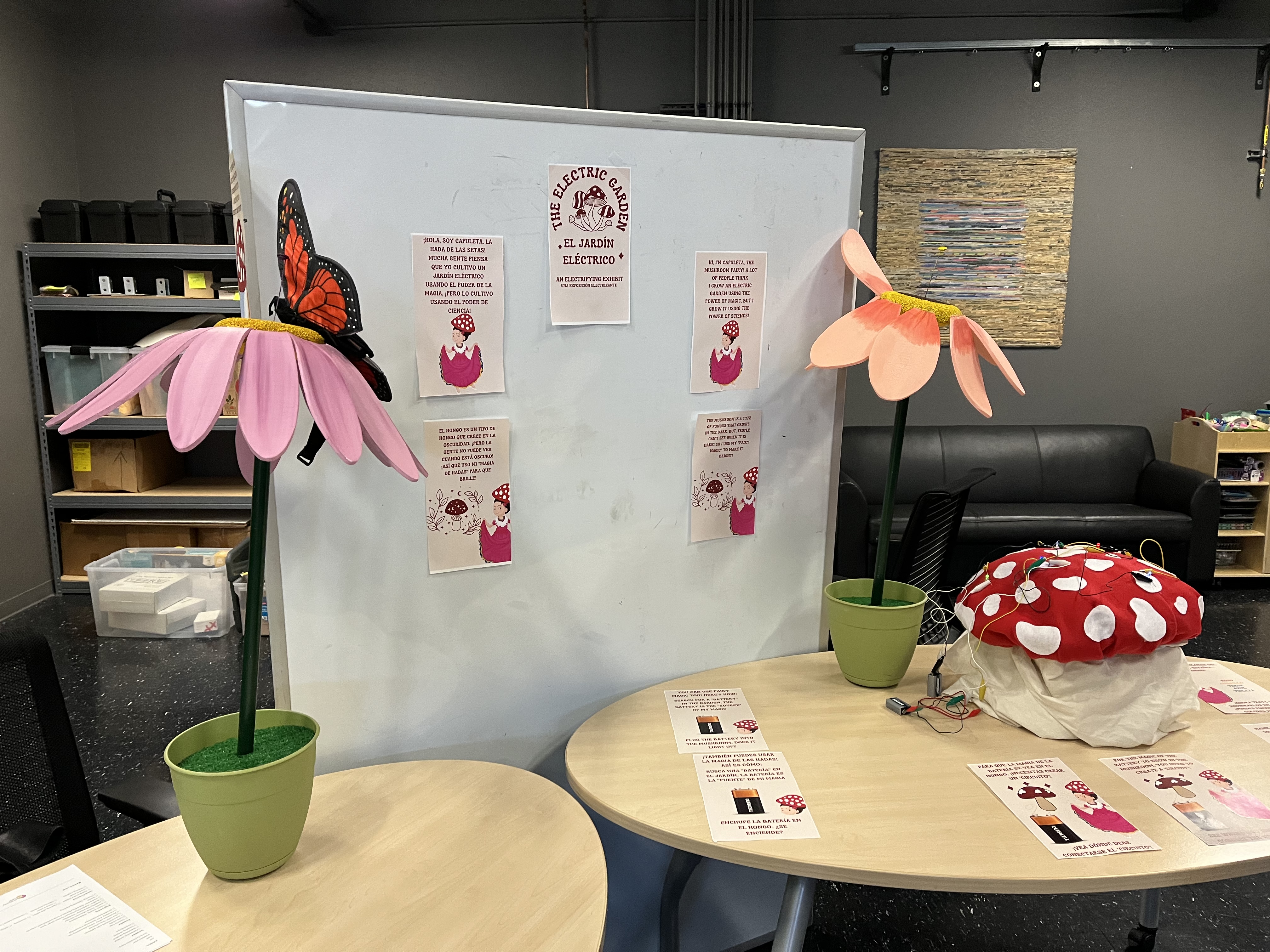 What if we could leverage the inherent power of the collective imagination as a medium for integrating the arts and the sciences? This is the basic premise of The Electric Garden—the exploration of the timeless, familiar, archetypal images of the imaginal realm as a medium through which to teach scientific concepts.

In this report, we outline our basic design goals and ideas, delineate the two prototypes we created, analyze our findings and feedback, and discuss our future plans for the project. Furthermore, through the creation of this project, we hope to provide a grounding of theory, a blending of both the scientific and the creative, upon which further projects of a similar vein may be explored in the future.

We seek to design an inclusive, interactive learning experience for makers of all ages and genders that introduces concepts found in basic electronics and circuitry. Our goal is to encourage makers to create and problem solve while learning artistic and scientific concepts in between. We want to provide a learning space which allows makers to problem-solve, reassess goals, and use their imagination to explore possibilities, such as described by Resnick and Rosenbaum [1]. We sought to curate an exhibition that integrated this approach as a foundation for our design.

Furthermore, we seek to expose participants to a multi-lingual learning experience by teaching concepts in both English and Spanish. Our goals are two-fold: primarily, we seek to reinforce our goal of including and expanding engineering to underrepresented groups. We hope by including this aspect of the exhibit that we will foster a more welcoming and inclusive environment to people from Spanish-speaking communities, who have traditionally been excluded and underrepresented in engineering. Secondly, we believe that the connection between magic, nature, and science encapsulated in the exhibit runs parallel to cultural themes found in Latin America, for instance in the Latin American literary movement of Magical Realism [6]. This cultural connection may provide Spanish-speaking participants with an added unconscious and imaginal benefit when participating in the exhibit, which we hope will ultimately lead to added participation in STEM.

Generally, our project audience is aimed to be inclusive to makers of all ages and genders, who have limited exposure to concepts in electronics, and particularly limited in terms of their interaction with physical circuits. In future iterations of this project, more work should be done to specifically determine if a particular age range should be considered when developing these materials, or if having limited exposure to the electronics concepts is sufficient. We also seek to target audiences who have been traditionally underrepresented in engineering, including girls and Latinx children.

Makers of all ages will be able to interact with the exhibit by following a short narrative embedded with a step by step guide to build the mushroom led circuit. Each step will provide the maker with a short introductory lesson on circuitry and hints to help them along the way. The step by step process encourages makers to think and troubleshoot. If makers request additional help with the steps, they are able to flip the step by step cards and retrieve the answer to the steps.

For our initial exhibit prototype, we sought to curate an exhibition that integrated the discussed Learning Goals as a foundation for our design. The design consisted of an interactive mushroom display and an LED circuit. Makers were introduced to the “Electric Garden - El Jardín Eléctrico” and a short story about a mushroom fairy, who illuminates the mushrooms in the garden with the power of science. Makers are led through the process of building their colored LED circuit with hints and guided steps.

During class time in Week 5, we presented The Electric Garden to the class. We utilized the giant flowers that were produced by Kylie and the team in order to set the scene.

We were really excited by the volume and creativity of ideas that our classmates contributed to the exhibit, which we discuss at length in the Design Evaluation section of our report. For our final project prototype, we utilized these ideas and notes our classmates shared with us to work on the next round of designing for the final project, discussed in the following section.

To address feedback from the initial round of prototyping in both the narrative aspects and presentation of scientific concepts, we decided to make LED Glowing Mushrooms. These LED glowing mushrooms will be arranged and presented to create a “fairy ring” (a naturally occurring ring of mushrooms) that connects to a “magical stone”, representing the battery that powers the circuit. This also connects to the educational goal to introduce and engage underrepresented groups.

In order to create our final project design prototype, we incorporated a few new artifacts to our exhibit, namely 3D printed objects. 3D printed objects provide a form of sensory integration by feeling textures and shapes of objects. With our upgraded design we aim to provide a more hands-on learning approach, and allow for further tactile exhibition, which we hope will lead to a more immersive presentation of the scientific concepts explored in the project.

We sough out to design a mushroom garden constructed of 3D printed objects using translucent filament to create a glowing lamp-like effect using the LED circuit. During our brainstorming phase we planned out our designs along with materials we would require. Upon meeting with our 3D printing lab we were quickly notified that access to translucent/clear filament was not an option. We quickly redesigned our mushrooms to print in a solid filament (white) and decided to adjust our circuit to stay true to our initial concept. Given the solid filament, we were not able to place the LED lights underneath the mushroom caps, instead we opted to place the LED’s on top to continue with the lamp-like effect of the electric garden.

Much of our project design philosophy is rooted in Papert’s theory of constructionism [4]. Building upon the idea of mental construction as it pertains to learning, Papert addresses the importance of the freedom to asking questions about the used methods and materials. This theory encourages creators to reevaluate the notions of learning and teaching from the way we once knew or know it to be. As Kafai mentioned in the book Cambridge Handbook of Learning Sciences, many of the challenges that continue to be faced within learning and teaching are relevant in the learning sciences [5].

Connections to Arts, Making, and Engineering

Our design approach began as a playful brainstorming session of unique learning ideas incorporating elements of art, computer science, and education. Mitchel Resnick and Eric Rosenbaum mentioned in their chapter “Designing for tinkerability”, the many pathways to making things while creating a richer learning experience. Resnick and Rosenbaum introduced the tinker approach, which is characterized by play, iteration, and experimental styles. Allowing makers to problem solve, reassess goals and use imagination to explore possibilities [1].

Throughout the quarter, we had a few rounds of design evaluation that helped inform the subsequent design process and evaluation for the next prototype created.

The feedback we received from our classmates during the Week 5 Exhibit presentations were primarily categorized into two sections: (i) Expansion of Narrative, and (ii) Presentation of Scientific Concepts.

(i) Expansion of Narrative

Participants were drawn in and excited about the narrative elements that we included in the exhibit, and our classmates ideated on further expansions or areas to improve upon for further prototyping. Phebe and Mengqi challenged us to expand on the narrative, and to incorporate Capuleta the mushroom fairy more into the exhibit somehow. How can empathy and helping Capuleta finish her garden be further incorporated in the exhibit?

Lora and Santiago similarly suggested to further expand on the narrative. Santiago pointed out the cultural significance of the themes of magic and nature in the narrative particularly for Latino families and children. This dovetails nicely with his suggestion to incorporate scientific elements, such as the battery into the storyline (a magical stone that makes the fungi glow). Both of these observations from our classmates aptly connect to the ideas presented by Peppler et al. regarding the importance of both empathy and narrative in engineering activities [3]. In general, exhibit-goers also really enjoyed the immersion into the narrative and fairy-tale world the imagery of the mushrooms and the giant flowers provided. To further expand on that, Lora suggested the idea that participants could “become” a provided character of choice, such as a wizard, fairy, or a gender-neutral character such as a toad, to allow for further immersion in the experience.

In addition to feedback on the narrative elements, we also received some insights and ideas for how to potentially expand the presentation of the scientific concepts in the exhibit. One of the primary learning objectives of the exhibit is to demonstrate concepts of basic circuitry and electronics, similar to the lesson we encountered in class during the E-Textiles lesson in Week 3. Some of the suggestions and ideas that arose out of conversations with our classmates during the gallery walk included:

While in the context of this course we have limited time and resources to further materialize an exhibit, these conversations suggest that potentially a multitude of future exhibits and lessons can be explored with the fairy-tale magical garden theme in mind.

Additionally, we received feedback from our guest lecturers on our exhibit prototype that we presented during week 5. We received this later in the quarter, and thus were not able to incorporate it into our Final prototype design. However for future iterations of the project, we plan to analyze this feedback and utilize it for building our next phase of designs. We’ve included this feedback in the Appendix of this report for further reading and future reference.

We were fortunate to receive constructive feedback from our final project gallery walk in class. Among the positive feedback we received, some helpful suggestions concerning the filament used for our mushrooms were shared. Incorporating more biological concepts within the narrative was also shared. Many critiques expressed the desire to expand the exhibit and create a life-size version of The Electric Garden. The following are feedback we received from the final project gallery walk:

Ultimately, we are excited and eager to continue exploring improvements for the exhibit. This work has demonstrated to us that by embarking on a project incorporating these fairy-tale themes, we are not only exploring the exhibit at hand, but the inherent magic and wonder and that exists in our own collective electric garden through this powerful and universal fairy tale imagery.

[4] Papert, S. (1993). Instructionism versus constructionism. The children’s machine: Rethinking school in the age of the computer (pp. 137-156). New York: BasicBooks.